The curriculum of the Black Falcon School of Arms is modeled on the traditional weapons forms in which medieval or early Renaissance English martial artists were expected to be proficient. Some compromises have been made in order to include medieval sources that are not English, or English sources that are not medieval (where no English sources appropriate to the time period can be found).

Based on notes kept by the Company of Maisters of the Science of Defence near the end of the 16th century, and modified according to the scope of BFSA's study, the weapons forms we study and practice are: longsword, shortsword, quarterstaff, wrestling/unarmed combat, and sword & buckler. In addition, other weapons and traditions are studied to a lesser degree.

This is the weapon that most often comes to mind when one hears the term "sword fighting." Not the brutish heavy steel bar that many Hollywood films would imply, rather, a highly developed and refined instrument of defense used by expertly trained men and women of the middle to upper classes in medieval Europe. "Longsword" is a rather ambiguous term, essentially used during the period to differentiate the sword from another, shorter sword. The term can be applied to any sword intended primarily for use with two hands but not so large as to preclude, occasional, one-hand use.

The elegant use of the long sword in two hands serves as the core of the Black Falcon School of Arms' martial study. Beginning with the foundational bread-and-butter cut, thrust, and parry of George Silver, students progress through the nimble, slashing combos of Ledall's bastard sword. Advanced students and schollers study the Harleian Two Hand Sword's whirling, counter-offensive armored combat techniques.

Like "longsword", the term "shortsword" is an ambiguous one. The shortsword, as it is studied in the BFSA, refers to the single-handed basket hilted sword which gained popularity in the late 16th century. It is from this period that the term "broadsword" is first applied to a weapon and this is the weapon to which that term was applied for the practical purposes of differintiating it from the more slender rapier. The tradition of shortsword practiced by the BFSA can be applied to broadsword, backsword, or sidesword.

By far the most developed and common system of swordplay from Renaissance England was that of the short cage-hilted sword as described by George Silver. Simple to learn but difficult to master, Silver's system of movement was so effective that British military fencers of the 19th century advocated its use for teaching upon its rediscovery.

The quarterstaff, perhaps more than any other european weapon, has suffered a great misrepresentation in popular culture. Forget the images of Robin Hood sparing with Little John by bumping their staves into one another, this is a formidable weapon with great reach that can severely injure or kill by virtue of its great mass.

Quintessential to the English martial identity, the quarterstaff was a fearsome oak or ash stave of 7, 8, or 9 feet in length. Its solid, deadly movements are both decisive and deceptively swift. George Silver and Joseph Swetnam's Renaissance texts form the basis of our quarterstaff curriculum, which in turn informs the use of the longsword.

Any fight with weapons can instantly devolve into a wrestling match. This was well understood by the Medieval and Renaissance masters of defense and, as such, no well rounded student of the sword would consider his training complete without a grounding in wrestling. Joint locks, empty hand strikes, trips, and throws are all incorporated into this aspect of the art. The Black Falcon School of Arms' wrestling and grappling material is collated from multiple sources, including George Silver, Zachary Wylde, and occasional Continental sources (where clarification is needed). 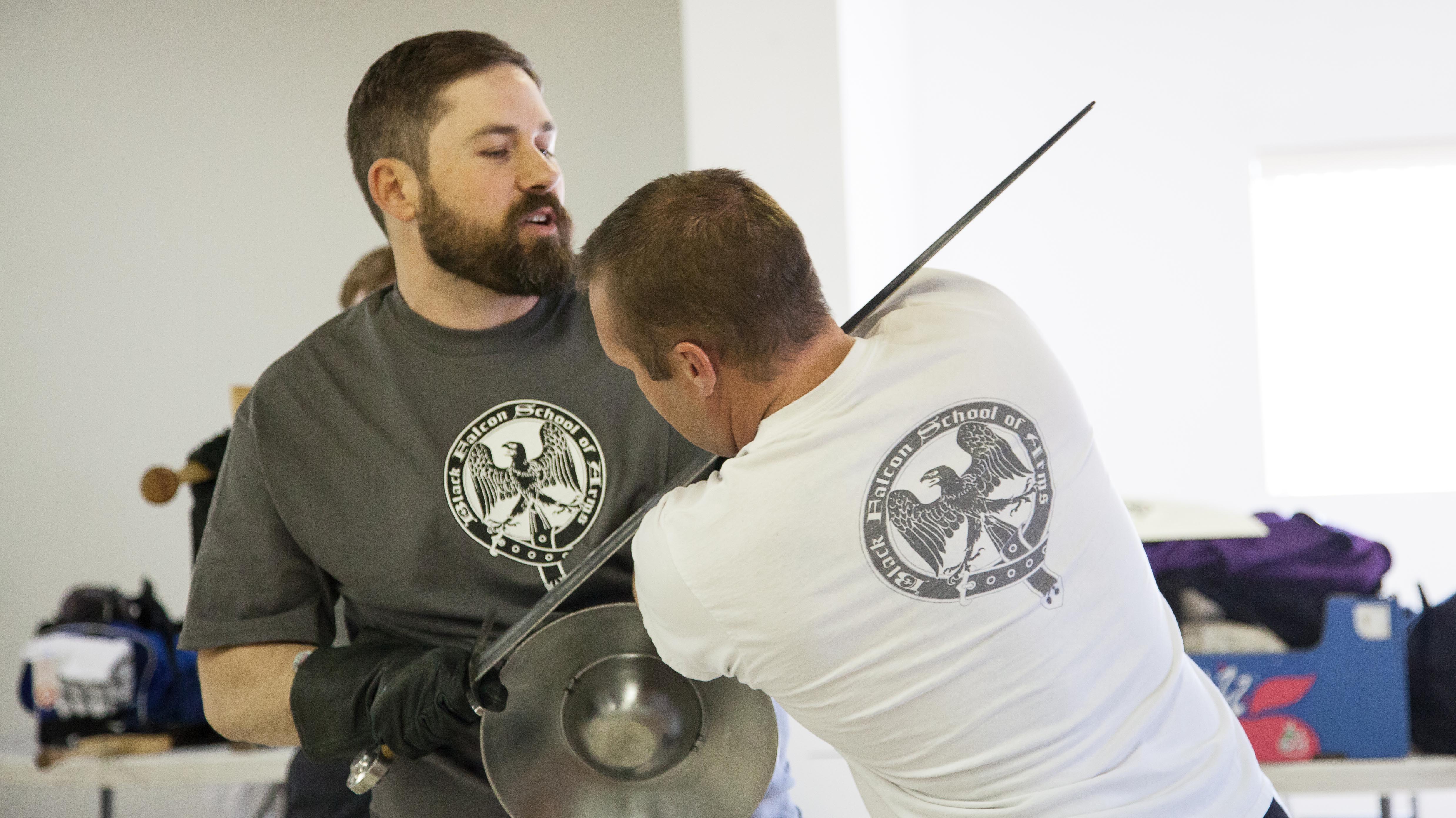 The term swash-buckler brings powerful imagery to the mind and it is from the use of the buckler, a small fist shield, that this term is derived. Brash young swordsmen would walk about striking thier own buckler with their shield in order to draw attention to themselves and intimidate others.

One of the most widely-used combinations of weapons throughout all of medieval Europe was the sword and buckler, and England was no exception. In the absence of clear technical English advice for its use, the BFSA uses the German I.33 text as its basis for sword and buckler study.